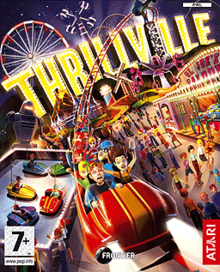 As If To rub in the fact that the football season is in hiatus, cricket has fought back with something of a double whammy. Joining EA's functionally named perennial, Cricket 2005, the resurrected Brian Lara game harks back to an earlier age. It's now ten years since the original Lara (not that Lara) game appeared, and 12 years since the batsman's epochal 501 innings. Brian may be past his best now. but if nothing else, the money he'll get for this should help boost his retirement fund.

However, it would appear that the bulk of the licensing kitty went on securing the veteran's name, as the rest of the game has something of a cheap and cheerful look to it, particularly in comparison to EA's customarily authentic approach. Visually, it's a more cartoony affair, and as far as player likeness go, suffice to say England captain Michael Vaughan is more Yorkshire Ripper than Yorkshire spinner. That said, it's actually one M Vorner' who leads out our boys, legalities precluding the use of real names (although of course you can change them yourself).

Likewise, you're reduced to playing at North London or South London as opposed to Lords and The Oval. In that sense at least, Brian Lara versus Cricket 2005 mirrors Pro Evolution Soccer versus FIFA, with EA's financial might predictably winning the licensing battle.

This aside, it's a pleasingly playable affair, at least on the easier Slog mode or Village setting, with greater precision needed for County and Test.

Batting is mainly a pleasure, and cracking a six into the crowd is a possibility for all but the most cack-handed buffoon. As for bowling, there aren't as many options as in Cricket 2005 and it's largely a case of varying the attack and hoping for the best. The fielding is marginally interactive, with a meter appearing above the fielder's head and an accurate button press resulting in an accurate throw.

It may not be a deal-breaker, but Brian Lara International Cricket 2005 features not only a ridiculously long name, but also the biggest commentary team ever to appear in any cricket game. Step up to the mic David Gower, Tony Greig, Jonathan Agnew, Ian Bishop and Bill Lawry. Plus, apart from the usual test and one-day options, classic matches including the original Ashes and Bodyline series are playable in grainy black and white, although we should point out that when aiming to recreate the 1880s, having advertising hoardings with website addresses on them somewhat undermines the effect.

Overall, while there's not much between the two, Lara is a marginally quicker, more dynamic and ultimately more accessible affair than Cricket 2005, which is more suited to hardcore cricket fans. Forget the whole thing and just watch The Ashes with a cold beer.